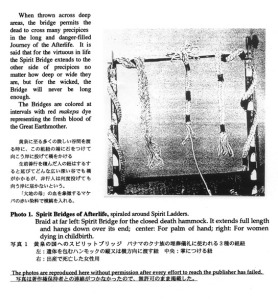 F. Sorber’s search of the literature on loop-manipulation (l-m) techniques in 1998 revealed two kinds of braids used in the burial customs of Cuna Indians living in southern Panama and San Blas Islands, who are known better for the mola (Note 1 and 2).  Called the Spirit Bridges of the Afterlife, using these braids for purposes other than burial is taboo (Photo 1 Left).

In Photo 2 (above) two women are making a Spirit Bridge; one woman holds the loops mounted on the fingers (finger-held method) with palms facing each other, the other beats at the fell to tighten the structure while holding the braid head.  Although no description of the construction procedures has been given, we can decern from photo 1 that two braids on the right (Spirit Bridge1) are square braids made using 5 loops.  One on the left (Spirit Bridge 2) looks like a braid with an unorthodox pattern (UO) made using 7 loops.  Only one face of the braid can be seen, as it has been wrapped carefully around the Spirit Ladder.  From the face shown, two possibilities can be surmised (Photo to be inserted) (Note 3).  More than 5 or 7 loop ends seen on some braids are because the yarn was used in double.

A similar burial custom and taboo among Cuna Indians living in northwestern Colombia has been reported (Note 4).   From the diagrams of the two construction procedures given in the report, one can discern that the finger-held (f-h) l-m in which the braider holds the “palms facing each other while operating with the index finger” (here, tentatively called Method #1) is used (Note 5).
One of the two, TYPE I, is a square braid, the same as Spirit Bridge 1.  A point of interest here is that TYPE I is made taking the shed differently from the more common Method #1 square-braid procedure (See Illustrated Instruction Series=IIS No.1, Figs. 3a and 3b).  We don’t know which one of the two has been used to construct Spirit Bridge 1.
TYPE II is different from Spirit Bridge 2 (See II No. 1, Fig. 4) (Note 6).

TIE STRINGS ON A COAT OF THE KHANTY PEOPLE IN SIBERIA

Another l-m braid specimen to add to the World Distribution Map of L-M Braids was found among the ethnographical costume collection of the National Archeology and Ethnology Institute in Novosibirsk, Russia.  They are a couple of pairs of front closure strings attached to a jacket of the Khanty people who lives in northwest Siberia, along the River Ob.  The braid made of wool-like fiber exhibited the most obvious characteristics of an UO braid, having a 2-ridge braid on one face and a 4-ridge braid on the other (Photo 3 Left).  The Khanty braid, however, is round on the four-ridge face and flat on the two-ridge face in contrast to the most often reported UO (here I tentatively call UO No. 1), which is flat on the four-ridge face and round on the 2-ridge face (Photo 4)

Although I could not examine the braid further, I suspect it to be a

combination tubular braid of two-ridge and four-ridge flat braids.  This tubular braid can be made using either Method #1 or #2  (See IIS No. 1, Figs. 6a or 6b) (Note 7).

Realizing that there has been no report of UO No. 1 made using Method #2, I made a sampler by myself.  To my surprise, I got a perplexing result; the sampler had a U-shaped cross section, entirely unlike the half-moon shape of that made using Method #1 (See IIS No. 1, Fig. 5a and 5b) or Method #3.  Could this unexpected outcome be utilized to identify the construction method of specimens for which no information is available?  While this phenomenon warrants careful probing, at this moment, it should rather serve as a warning not to rely too heavily on the appearance to identify a braid.

In l-m techniques a 5-loop procedure, for instance, produces a ten-element braid because each shank of a loop is individually interlaced into the mirror-image spots on the braid.  A braider handles only one half as many yarn ends as needed for the structure of the braid.  This is an important feature, resulting in the ability of l-m techniques to produce structures with complexity far exceeding what is expected from a purely hand-manipulated technique.
Among historical as well as present day usage of the l-m studied to date, the number of incidence of finger-held (f-h) methods far exceeds that of hand-held (h-h), those in which loops are slipped around the hands and held in a sequential order.

BRAIDS WITH AN UNORTHODOX PATTERN (UO)

The UO can be called the MARKER OF THE L-M BRAIDING TECHNIQUE, because its structural characteristics are rarely seen in those made by any other braiding technique.
In UO procedures, the operating finger (OP) goes “through” and skips “over” the loops to make a shed, such as seen in Figs. 2, 5 and 6.  The resulting structures contain a mixed interlacing of single and double elements.  The structure of UO is easy to make if f-h l-m is used, but is cumbersome if other braiding techniques are employed.  The UO is a unique development of the f-h l-m and does not belong to the group of braids that have developed naturally from other braiding techniques including the h-h l-m.  This is why one can be almost certain of the existence of l-m technique wherever the UO is found.
So far, only Japan and Thailand have no report of UO production among the societies where the practice of f-h l-m has been reported.

I hope readers would take the diverse and sometimes confusing topics in this issue in the spirit of field research and enjoy the contrast with a course study.

ILLUSTRATED INSTRUCTION SERIES:
INTRODUCTION;
NO. 2  Braids with an unorthodox pattern used among the Cunas in Colombia and Panama, and the Khantys in Siberia.

LIST OF OBSERVATION POINTS FOR RECORDING L-M TECHNIQUES
The list shows what to look for when you happen to encounter a person who knows l-m braiding and is willing to answer your questions.  It will be greatly appreciated if you take such a record and send it to us.

ACKNOWLEDGEMENT
Thanks are due to: F. Sober, who diligently continues bibliographical search and contributed the latest find to this issue; N. Speiser, who always willingly share her expertise with me; S. Berlin, M. Dusenberry and F. Kawaguchi, who generously contributed money to my new endeavor;  A. Dyer of contributing her book, “Purse Strings Unravelled,” to my L-M reference library; and those who sent me letters of encouragement.

L-M BRIC News is totally self-supported publication by the Loop-Manipulation Braiding Research and Information Center founded by Masako Kinoshita to promote the study of L-M braiding.  The Hardcopy version is distributed free of charge.  Donations from interested readers, however, are welcome.